I feel like I’ve lost my grandfather all over again, partly because Harry died the way my grandfather died:  suddenly, with no warning, and in the location he loved the most.  (For Harry it was the broadcast booth; for Grandpa, it was the garden.)  I cried most of the way to picking Ryan up, and I cried again when the radio station rebroadcast Harry’s play-by-play of the top of the 9th in Game 6 last October.  It wouldn’t be so bad but when Scott Frantzke’s voice cracked as he talked about Harry, I lost it all over again.

Harry will be missed.  Baseball in Philadelphia (and sports, since Harry did voice-overs for NFL Films, too) will never be the same.  We’ll miss you, Harry, but we know you’ll be watching the game with Whitey, and wherever you are, we know you’re smiling.

I took this picture at the Phillies Phestival last July.  I found it interesting—and somehow, appropriate—that sitting beside Larry Anderson in his shorts and sandals, Harry showed up in his crisp powder blue suit and white shoes.  Ever the class act.  🙂 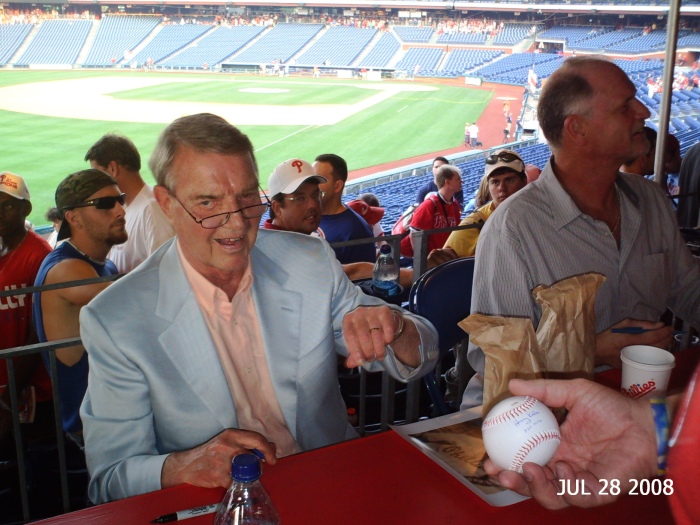 That’s John’s hand holding the ball Harry had just signed.  It occupies a place of honor in our collection.